Executives On The Move
Leadership Change at Nike, Under Armour and Adidas

Three of the industry’s biggest brands have announced changes at the top.Faced with ongoing change in retail, the impact of technology on their respective businesses, and a global business where key international markets have more growth potential than a mature North America, Nike, Under Armour and Adidas all announced key changes to their executive suites last week. (Read More)

Started as a college project by its founder and his stepdad, a college hockey official, NoSweat’s initial perspiration solution was cut-up maxi pads installed inside a player’s helmet. As the product ($6.99 retail for 3, $17.99 for a 12-pack) has evolved into a series of peel-and-stick performance liners in various shapes for hats, visors, helmets and hard hats, the company has attracted professional athlete investors from the NHL’s TJ Oshie to NFL wide receiver Golden Tate and the PGA’s Stewart Cink.

With current distribution focused on ecommerce and golf shops, the PGA Tour Superstore and subscription box services, Robin says NoSweat’s future distribution and R&D are focused on big boxes such as Target and Dick’s Sporting Goods and performance applications within specific industries and sports such as construction, the military and cycling. 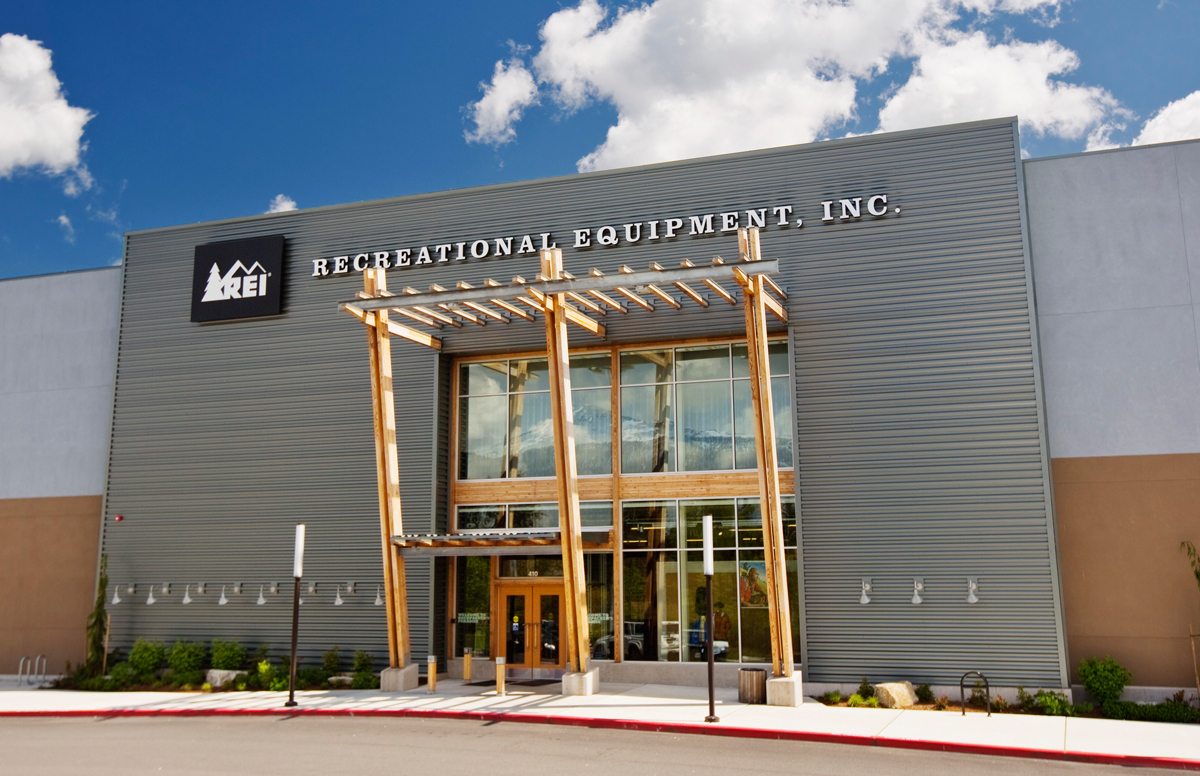 REI, under new CEO Eric Artz, for the fifth consecutive year will close all of its stores on Black Friday (Nov. 29), process no online payments and pay all employees for the day. But this year, the national co-operative is asking its 13,000 staffers and 18 million members to go a step further for the outdoors and join a nationwide clean-up effort throughout November. (Read More)

Mueller, who first began selling athletic first aid products to high school, college and professional sports teams as a side business 60 years ago, died in his sleep on Oct. 19. He was 85. (Read More)

Mercer Amsterdam introduce a new Vegan sneaker made entirely of Piñatex, a leather alternative derived from the leaves of a pineapple plant. The company says the manufacturing process for the style, the W3RD Vegan Pineapple Silver, ensures low production waste and strengthens the local economies in the Philippines. (Read More)

OluKai opens its first two company-owned retail locations in Hawaii on the island of Maui and O’ahu. Both stores will feature broad assortments of signature premium leather sandals and shoe and sneaker designs for both men and women. (Read More)

Tubes of the Week

5.4 Percent
‍Vietnam’s share as a global producer of footwear, third largest in the world and only behind India (10.7%) and China (55.8%).
(World of Footwear)
‍
$35 Billion
‍Estimated U.S.$ dollar size of Vietnam’s footwear exports in 2030. (Vietnam Leather, Footwear and Handbag Association known as Lefaso)
‍
90 Percent
‍Rise in Vietnamese minimum wage between 2012 and 2018 and more hikes are on the horizon. (Lefaso)
‍
$1.5 Million/$3 Million/$14 Million
‍Annual base salary of John J. Donahoe II, Nike’s new President and CEO as of Jan. 13, 2020; his target annual bonus; his annual target long-term incentive award except for FY20. (Nike SEC filing)
‍
34 Percent
‍Percent of all U.S. apparel sales made via ecommerce. (Digital Commerce 360)
‍
$27 Million
‍U.S. Navy may purchase this dollar amount of general safety boots from Rocky Brands through May, 2022.

Numbers In Play
The Sports Insight Index is our opinion of what we think are the 30 most important public companies in the industry, 15 vendors and 15 retailers. Space considerations prevent us from tracking more, but we will make changes over time.

After last week’s nearly 10 percent gain, segment suffers a nearly 12 percent decline for the period. Nine stocks rose and six fell. The biggest decliners on a percentage basis, likely due to currency swings, were the U.K. entrants in JD Fashion and Sports Direct. The latter has tapped RSM UK Group as its auditor. Dick’s, which inked a multi-year extension with store credit provider Synchrony Financial, sees Goldman Sachs upgrade its stock to a “buy,” citing a healthy athletic market, better service and more differentiated experiences in its stores. Plus, reports surfaced last week that DKS CEO Ed Stack, 64, could be considering a third-party, independent candidate for U.S. president. At this point, the conjecture is more rooted in publicity for the banner and Stack’s new book, “It’s How We Play the Game.” Walmart dropped its first “Black Friday” online deals on Oct. 25, and will close its first Los Angeles area store, in Norwalk, CA, on Nov. 1. Hibbett digital sales grew 25 percent in Q2 to account for nearly 8.6 percent of period revenues. The banner is projecting 80-85 net door closures in the current FY. Kohl’s continues to shrink its average door size, add new brands to its merchandise assortment and experiment with new in-store presentations.

Segment’s decline for the period was more than double the Dow’s 0.74 percent decline. Still, 10 stocks rose and five declined. Skechers intends to spend $85-90 million over the remainder of FY19 on its new distribution center in China, enhancements to its European distribution center, expansion of its California corporate headquarters and the opening of 15-20 more company stores. VF Corp. senior executives confirm that its Icebreaker North America and Smartwool businesses will relocate to its Denver HQ in Summer 2020. Deckers’ shares rose 1.3 percent after the UGG, Teva and Hoka One One parent exceeded Q2 revenue and EPS guidance. UGG men’s boot sales rose in the high teens for the period, and the company is now forecasting 5-6 percent topline growth this FY and a 15-percent operating margin. Puma, which now has 16 Hoops’ ambassadors with the addition of Boston guard Marcus Smart, is now forecasting a FY19 currency-adjusted sales increase of 15 percent, up from 13 percent. Callaway Golf, which reports quarterly earnings this week, signs a multi-year deal with the NBA’s Steph Curry that will focus on projects to make golf more accessible to underserved and underrepresented youth. Adidas, according to ESPN, is in negotiations with NBA guard John Wall to buyout the remainder of his five-year footwear and apparel endorsement contract, which was signed in Jan. 2018.

The O’Melveny attorney and Co-Chair of the Sports Industry Group address some of the crucial issues that still must be addressed in the wake of the NCAA’s recent decision to allow student-athletes to benefit from the name, image and likeness in 2021.

Angelo Ng, who spent more than 18 years working for Levi Strauss in a variety of roles and nearly four years at Nike, has been hired by Wolverine Worldwide as the company’s first-ever Chief Merchant Officer. He is being charged with developing a merchandising growth strategy and innovation roadmap for Wolverine’s dozen brands, which include Merrell, Sperry and Saucony.

The COO and Co-Founder of Chargebacks911 and Chief Information Officer of Global Risk Technologies, discusses security and fraud issues that may face retailers during the Holiday 2019 season, six days shorter than in 2018, and what measures specialty retailers should take to reduce chargeback and fraud losses during their most important selling period of the year.

Ed Schauder, talks about the far-reaching impact of possible legislation like California’s “Fair Pay to Play” Act on the future of collegiate sports and licensing. He has more than 30 years year experience in the sports and entertainment space, creating programs to protect and market intellectual property and negotiating licensing and corporate sponsorships and endorsement pacts.

Sky Outfitters, started by college student Keaton Hendricks, is selling socks, beanies and scarves. And the three-year old Indiana company, which follows a similar business strategy similar to Bombas, wants to help the nation’s less fortunate in homeless shelters in the process.

Sam Garzon, the founder and CEO of Miami-based UnoZero, says the young company’s name was inspired by all the soccer greats who have worn the number 10 on the pitch. Everyone from Pele and Zidane to Totti.

Mike Cosentino, founder and CEO of Big Peach Running Co., a seven-door run specialty retail chain based in Atlanta, made a bold move in August 2018, purchasing a 33-foot vehicle from a company in Marietta, GA that specializes in food trucks.

After nearly two decades in the business, Mary Steinebrunner is still in love with the protective footwear industry.

Irvin digs into the compression garment market and CEP’s role in advancing the category.

The NFL veteran says the menswear brands featured in his new “Back of the House” retail store and pop-up shops will allow customers to create their own aesthetic and sense of style.

The Rafter Club is embracing the creativity of basketball kicks and merging it into Italian-sourced dress shoes and boots. Brand wants to elevate basketball viewing culture to another level focused more on leather couches and scotch and less on beers at the sports bar.

The 31-year-old leader of the family-owned footwear company talks ‘Made in the USA,’ sustainability and the Buford, GA firm’s recent deals with J. Crew and Target.

Sports & Fitness Industry Association CEO Tom Cover weighs in on current climate in Washington, D.C., the status of the PHIT Act and the debate over e-sports.